THE FAR SIDE
OF THE DUNE

The future of Radio Liberty
and Pals Beach at risk

The site of the old Radio Liberty in Pals Beach is a facility of great historical and cultural importance with unique natural Habitats and of priority Community interest in the Montgrí, Medes Islands and Baix Ter Natural Park. 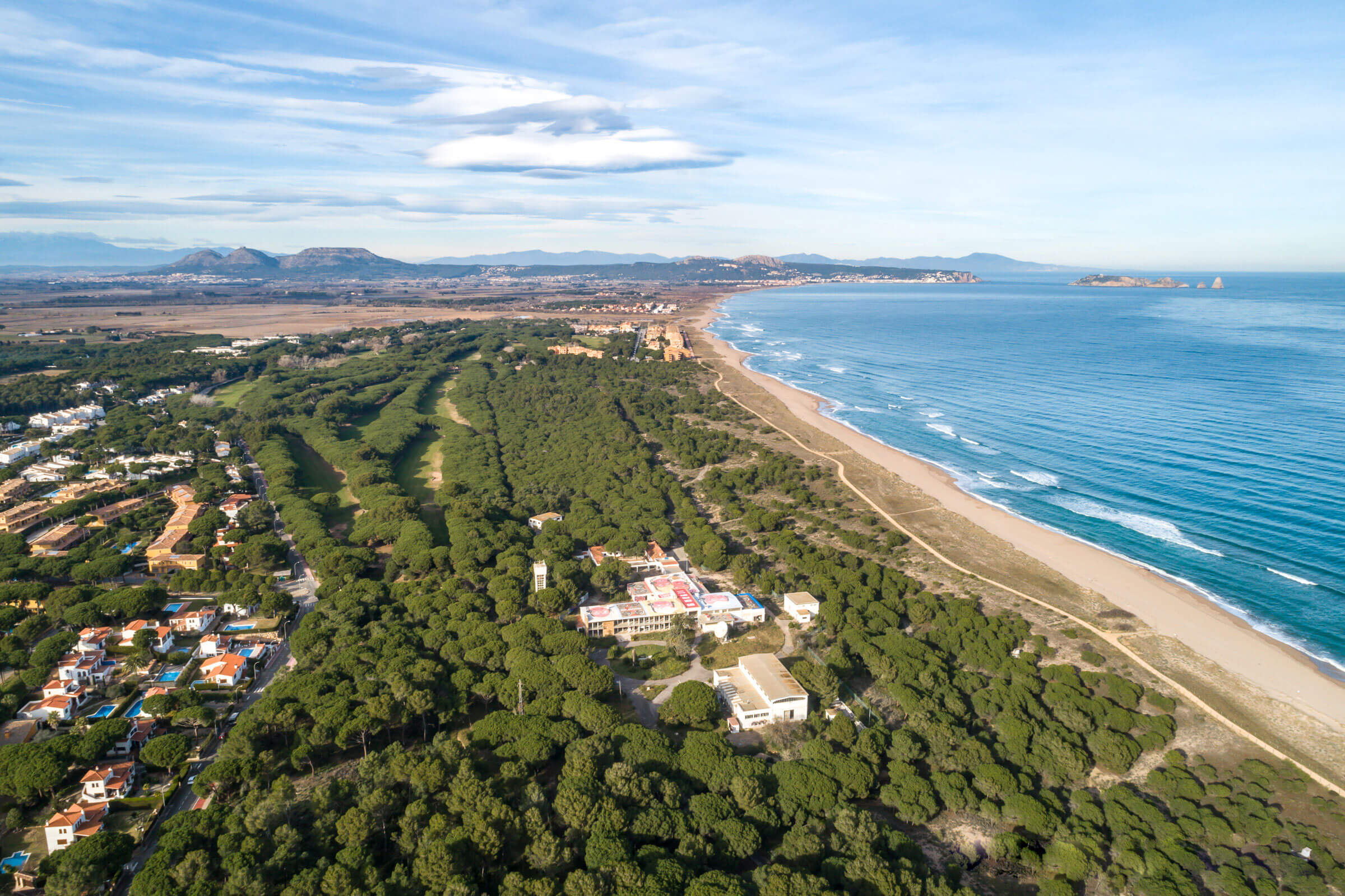 FROM A NUCLEAR PLANT TO AQVAM

In 1965 the Pals Beach was a candidate to install a nuclear power plant, an idea that fortunately did not occur. In its place Radio Liberty came into operation, occupying the beachfront for more than 50 years. In 2006 its large antennas were brought down. In 2020, the Parliament of Catalonia approved a Resolution that urges to discard the Aqvam project, remove some of the still existing buildings and renature the habitats, respecting the archaeological remains and restoring some of the buildings with a compatible use with the natural protection. The 330,612 m2 of Radio Liberty ground have protected the dunes from a very probable urbanization. Malgrat això, aquest patrimoni natural i cultural únic al nostre país està en perill.

Discover what it was Radio Liberty and Aqvam.

Thanks to a low human presence and the historical isolation of Radio Liberty, with a high security surveillance, the dune habitats have reached an exceptional environmental and landscape importance. But after the antennas were demolished in 2006, the facilities were left unattended and abandoned. The buildings, of great historical and technological value, were looted eliminating important pieces for industrial archeology and seriously endangering the fauna and flora throughout the area.

According to the Action Protocol agreed between the Ministry and the Generalitat, published in BOE no. 67, of March 19, 2007, La Generalitat should have managed and preserved the natural and cultural values within Radio Liberty. But the reality is very different …

Both the Spanish Ministry for the Ecological Transition, owner of the land, and the Catalan Government, have forgotten the Radio Liberty area for the last fifteen years, endangering the archaeological site and its dune habitats, one of the latest example of this unique fauna and flora in Spain, which have practically disappeared throughout the coast of and country.

Until there is a proper management and surveillance of the space the negative impact of uncontrolled visitors on this area suffers looting, vandalism, incivility, trampling of areas that should be protected and high risk of fire.

The action of the Public Administration in Radio Liberty is still non-existent but it is essential and urgent. Resources should be provided, collaborating with the Natural Park technicians and other entities such as the University, the Institut d'Estudis Catalans, the Cercle Català d'Història, environmental organizations or the CSIC, protecting and disseminating the natural, historical and cultural heritage.

We consider it essential to deconstruct some of the abandoned buildings, leaving some for a future Museum of Radio Liberty and the Cold War. Also, to recover part of the looted industrial archeology. Protect the archaeological site of the Medieval fishing village, allowing guided tours. Have an information point and nature workshops in the Natural Park and the regional Unesco headquarters. Saber-ne més.

The dune systems of Pals Beach are especially important to stop the advance of the sea and the regression of the beach in a context of rising water levels and intense storms.

The over-frequentation of visitors endangers the dune flora and fauna, a key habitat in a context of climate change, which almost disappeared in the rest of the coastline. The vegetation of the dunes is the only element that fixes and preserves the sand on the beach and protects it naturally against the advance of the sea and storms. But the City Council does not understand it that way.

The continuous felling of the pine forests on dunes and the future developments planned in Pals Beach very close to Radio Liberty, the Pals Mar, Pinar d'en Saguer and Rodors sectors, promoted or permitted by the Pals City Council, make some habitats disappear unique around the world. The pine groves fix the sandy dunes and protect them against erosion.

The state of abandonment in which the buildings and the 33 hectares of Radio Liberty are located, the high risk of fire, the lack of surveillance and the poor condition or scarcity of beacons, endanger the environmental, landscape, historical and archaeological values of the Natural Park.

The historical, natural and archaeological legacy of the Radio Liberty ground, which is unique in the world, it’s ideal to recover the natural habitats and creating a cultural facility and study centerboth for the sailor people who were living here in the Medieval age and for Radio Liberty and the Cold War, with the aim of study and disseminate the importance of this station. But it is preferred to speculate with other interests …

The perimeter comprising Radio Liberty hides great treasures. Remains of the old Port of Pals should be studied, disseminated, monitored and preserved as a matter of urgency. Constructions of royal origin dating back to the s. XIII to XVIII, but most remains are still buried. From this port it is believed that Christopher Columbus embarked for America. The remains of the fishing village of Pals show the existence of a documented Pals population near the sea. The inhabitants of the Torre de Pals were engaged in fishing and trade. Proof of its importance is the type of construction, the existence of the Torre Mora fortified by surveillance, or the Camí Ral, which connected the port with the walled town, and the fact that Pals was a Royal town.

At the same time, the most recent past of Radio Liberty full of unknowns must be discovered. Important archives of documents and remains are preserved in private collections at Radio Nacional de España, different private collections or the MOMA, which could be recovered for a future Museum of Radio Liberty and the Cold War, of great interest to future generations. Some recent studies speak of the global importance of this radio and the encrypted messages that were relayed by the spy organization Stay-Behind the countries behind the Iron Curtain.

We propose to preserve and improve the state of flora and fauna within Radio Liberty ground. It could be achieved with the following points:

Urgently allocating a budget for surveillance, cleaning and custody of the space. Respecting the General Protocol signed between the Ministry and the Generalitat. The Generalitat must begin to preserve the fauna and flora within the space, as well as their immediate custody and surveillance.

Respecting the General Protocol signed between the Ministry and the Generalitat. The Generalitat must begin to preserve the fauna and flora within the space, as well as their immediate custody and surveillance.

Applying for grants such as the Recovery Funds, Life Project or FEDER of the European Community, for the recovery of habitats and the archaeological site through work camps, etc.

NEW DELIMITATION OF THE NATURAL PARK

We ask for the promotion of actions for the protection and conservation of species and communities that require special protection outside the limits of the Radio Liberty ground, in adjacent sectors of natural interest, especially those that connect with other nearby natural spaces.

We propose the cleaning of the beach in Pals to be managed in a sustainable way, avoiding the use of the tractor in areas where there is a decrease in sand, with manual collection of waste and plastics.

Likewise, we require forests on sand dunes that are developable in Pals beach like Rodors, Jonquers, Roca Blanca and Golf de Pals, to be part of the same habitats and landscape units, to be protected from new urbanizations and included in the Natural Park.

On the other hand we also propose the deconstruction of the existing buildings, with the exception of some buildings, which could be an information point for the Natural Park, the Museum and the Center for Studies of Radio Liberty and the Middle age Fishing Village.

A municipality with only 1,000 main houses, 350 of which are empty, far exceeds the accommodation offer, with 2,700 additional second residences and 5 campsites in Playa de Pals. Even with these figures, the City Council believes that much more are needed …

The initial approval of the Municipal Planning in 2015 foresees the elimination of most of the pine forests on coastal and continental dunes in the Pals Beach, over different areas like Rodors, Pineda de Pals and Pals Mar. A very threatened and rare habitat in the world, which is to be converted into macro-urbanizations with 160,000 m2 of built area and more than 3,500 second residences 7 km from Pedró walled town, which will be left empty practically all year round, generating very few jobs and a seasonal and precarious economic activity (Source: Idescat and the Costa Brava Tourist Board).

At the same time, the municipality will accumulate 82% of secondary housing, well above other seasonal municipalities on the Costa Brava, such as other cities with massive tourism like Lloret de Mar or Playa de Aro.

The sewage network and pumping stations are insufficient and the quality of bathing water from the sea worsens every year.

The saline wedge advances dangerously due to the over extraction of the aquifer, which already reaches Parlavà town, through the wells of Gualta from where the water is extracted by the municipalities of Pals, Palafrugell, Begur, Regencós and Torrent. If the new macro-urbanizations planned by the Council are built in Pals beach, this aquifer and wells will come to its end, and other populated towns like Begur or Palafrugell will be left without enough drinking water.

Currently the streets in the beach area are in very poor conditions and overwhelmed by increased traffic with poor, seasonal public transport and without a bike path to the beachwhich, due to the flat terrain of the municipality, would allow a more sustainable mobility, segregated from road traffic and especially appreciated by many of our visitors.

The seasonality of massive second homes destabilizes the economic activity but the Council wants to promote the construction of new large urbanizations with more second homes in Pals beach area. It is essential to realize that …

Surprisingly, the most touristic and seasonal Catalan municipalities, with more second homes, have the lowest per capita income and do not create wealth in the local economy. According to IDESCAT, Lloret de Mar is the municipality with more than 5,000 inhabitants in Girona with the lowest per capita income, with only € 10,900 in 2016. This is 64% below the average in Catalonia, which is € 17,000. The situation, however, is similar to other coastal towns with more second homes, such as Pals.

GET UP TO DATE WITH OUR NEWSLETTER

You can find out more about which cookies we are using or switch them off in settings.

This website uses cookies so that we can provide you with the best user experience possible. Cookie information is stored in your browser and performs functions such as recognising you when you return to our website and helping our team to understand which sections of the website you find most interesting and useful.

This website uses Google Analytics to collect anonymous information such as the number of visitors to the site, and the most popular pages.

Please enable Strictly Necessary Cookies first so that we can save your preferences!